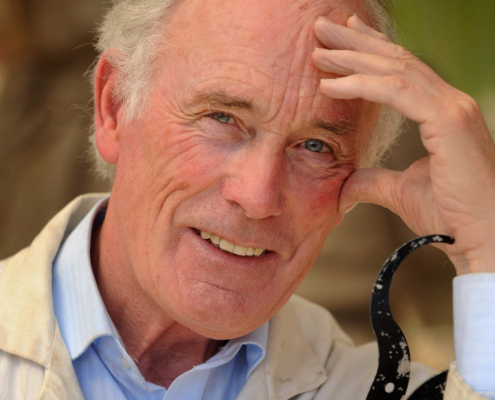 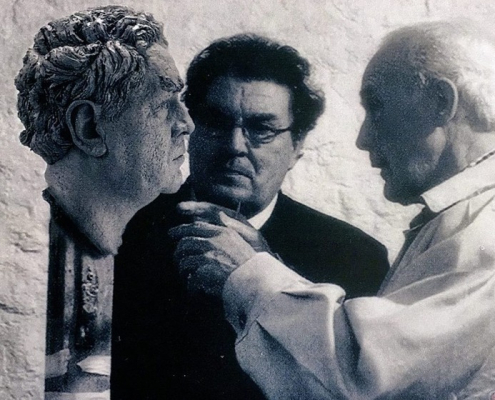 HAD John Sherlock embarked on his career as a sculptor in his twenties rather than almost 50 years later, his name would likely now feature in lists of Ireland’s most celebrated artists.

As it is, he earned local & international recognition for his work… within just a few short years for his bronze busts of figures such as John Hume and Seamus Heaney and large-scale commissions in Ireland, Britain, France and the USA.

It was in keeping with a life in which it seemed that anything he turned his hand to was a success.

Fizzing with charm and creative energy, John had also been a teacher, hotelier and property developer as well as a qualified pilot, master mariner and accomplished musician.

Born in Rosemount in Derry in 1933, he was the fourth child of May and Patrick Sherlock who instilled from an early age the importance of making use of all the gifts God gave them.

He was at St Columb’s College at the same time as Hume and Heaney and after studying art in Belfast and Liverpool, he taught alongside Heaney at St Thomas’s secondary school and St Joseph’s teacher training college in west Belfast.

However, their paths diverged in the late 1960s when he made the first of several radical career changes, entering the hotel and property business with his brother-in-law David Magill.

With characteristic flair and bonhomie he helped build the reputation of the Chimney Corner Hotel in Co Antrim.

It was around this time, in 1970, that John also met his wife Rosemary, who was a tenant in one of his Belfast properties.

They married in 1976 and made their home in a large Georgian property in Whiteabbey among beautiful gardens opening out into Belfast Lough.

They had a son, Jonathan, and raised chickens and Golden Retrievers in what he would describe as a “joyous” childhood filled with laughter, music and sailing trips.

In his own schooldays John had been an accomplished violinist and pianist, winning festivals with his sister Angela and performing duets together on BBC Radio.

He would now add classical guitar and the trombone as he encouraged Jonathan in his music and even taught in his school, with their ‘Woodbank’ home also host to many evenings of entertainment with the couple’s wide circle of friends.

John was in his late sixties when he performed his next handbrake turn and returned to his first love of art.

His first commission as a young student had been from the philanthropist Henry McIlhenny to make stags’ heads for the gates of Glenveagh Castle in Donegal.

Now, almost five decades later, he found himself engaged in projects as varied as busts of John Hume, David Trimble, Seamus Heaney, Louis MacNeice and Fr Denis Faul, to a huge memorial to the UDR in the centre of Lisburn, and a sculpture celebrating Harry Ferguson’s historic first powered fight for the main Belfast-Dublin road.

His first public work was a life-size bronze of the cardiologist Frank Pantridge which sits outside Lisburn’s City Council’s offices. 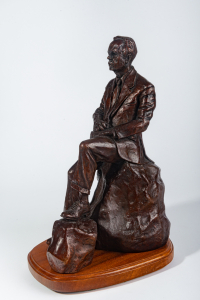 A fine sculpture of Dame Mary Peters at the Mary Peter Track in Belfast is also his work, and he was entrusted with restoration of the iconic Carson memorial in front of Parliament Buildings.

The UDR memorial, in Lisburn’s Market Square, took two years from the first maquette and preparing the clay moulds to bronze casting and installation, and cost more than £200,000.

Other notable pieces include “Blitz” in the Ulster War Museum, Harry Ferguson in Growley, Bikers in Dromara, historical figures Mitchell & Martin in Newry, and major tributes to Daniel Massey & the Massey Ferguson company.

He worked 12-hour days in his studio at home before finally retiring to enjoy some well-earned rest with Rosemary, his last commission being for his local church, Star of the Sea in Whitehouse, for its 150th anniversary.

He was awarded an OBE in 2009 and elected a member of the Royal Ulster Academy.

Close friend Mike McCann, former honorary secretary of the academy and John’s business advisor during his years as an artist, said he was simply a force of nature.

“It was joy for me to partner with John. He was a multi-talented, genial dynamo whose company was as pleasant as his output was prodigious.

“From zero professional artistic work in the previous 40-plus years, John created a remarkably impressive portfolio in the next decade. No challenge was too much for his creative mind and technical skills.

“His work wasn’t widely known because his pieces were either private commissions or public sculpture, but his unique bronzes are powerful examples of classic realism.”

In a tribute at his graveside in Co Donegal, his nieces also spoke of generosity of spirit.

“There is much to remember about John but perhaps it is his use of time and his patience that is most impressive – ask his help and he simply stayed until your problem was solved.

“Handsome, charming, gracious, eloquent, a modest and accomplished gentleman – John will be so badly missed by all of us.

“He has been an inspiration to this generation and will continue to be into the future.”

John Sherlock died at home on June 18. He is survived and sadly missed by his wife Rosemary, son Jonathan, brother Malachy and sisters Angela and Joan.