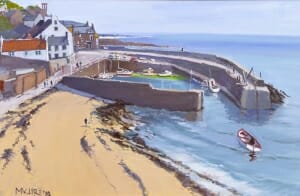 Cecil Maguire, the Northern Irish landscape artist, whose paintings of the west of Ireland are widely appreciated, has died at the age of 90. A member of the Royal Ulster Academy (RUA) and the Royal Irish Academy (RIA), Maguire captured the social and cultural life of the west of Ireland in his impressionist paintings of horse fairs, sailing regattas, funerals and coastal and mountainous scenes. Although not a figurative painter, people were nonetheless often prominent in his paintings.

Ranked alongside other Ulster landscape painters of the 20th century, including James Humbert Craig, Maurice Canning Wilks and Frank McKelvey, Maguire’s work is popular in galleries and auction rooms.

President Michael D Higgins says that Clifden Fair, Winter by Cecil Maguire was the first painting he bought with his first salary from University College Galway. 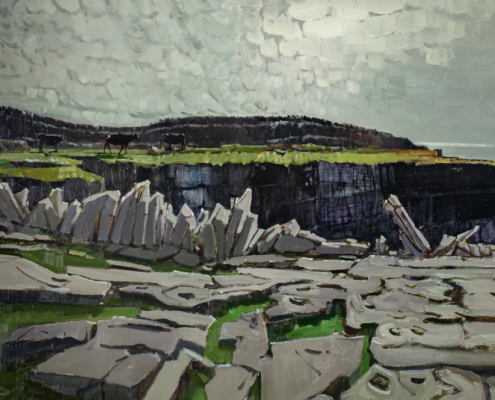 Kenny’s Gallery in Galway city, which opened in 1968, was the first gallery to show his work in the Republic. By then, Maguire, his wife, Mona and their daughters, Denise, Amanda and Sian were spending holidays in Roundstone, Co Galway. Throughout the 1970s, Maguire had solo exhibitions in Kenny’s almost every year – drawing interest from locals and visitors alike. President Michael D Higgins says that Clifden Fair, Winter by Cecil Maguire was the first painting he bought with his first salary from University College Galway.

From the early 1980s to the 1990s, Maguire exhibited his paintings at the Oriel Gallery in Dublin and then moved to the Leinster Gallery [now the Trinity Gallery]. His work was also shown at the Bell Gallery in Belfast and Martin Davison’s Straid and Davison Galleries.

Davison published a book on Maguire’s paintings, entitled Towards a Retrospective in 2002. In the introduction, Davison writes of Maguire’s passion for the west of Ireland and how he captured an Ireland where the old ways were in decline. In the book, Maguire himself wrote about how painting is an attempt to capture the emotion, the excitement of an experience. “There has to be an emotional jolt, then an attempt . . . to recapture that feeling, that trick of light. To see that familiar landscape in an unfamiliar way and convey that in the painting.”

The eldest of three children born to Margaret and Charles Maguire, Cecil Maguire grew up in Lurgan, Co Armagh, where he played in the Salvation Army band as a teenager. Following his A-levels at Lurgan College, he went to Queen’s University Belfast to study English. He graduated in 1951.

Maguire returned to his home town to teach English at Lurgan College, one of Northern Ireland’s oldest grammar schools. The school was also where he met his wife-to-be, Mona Ryan. The couple married, settled in Lurgan and had three daughters.

Maguire was working as an English teacher when he was introduced to the Ulster painter, Maurice Canning Wilks, by his wife’s parents. He subsequently went on painting trips with Wilks to Cushendun and along the Antrim coastline. He later enrolled in evening art classes and joined the Lurgan Arts Club.

By the early 1960s, he was exhibiting regularly with the RUA – and subsequently won silver and gold medals in annual exhibitions – however, he continued to teach English at Lurgan College, becoming head of the English department.

While there, he inspired many students with his ability to quote Shakespeare plays and a wide range of poetry. He produced the school plays, ably assisted by his wife who made the costumes for the staged productions. In 1981, he took early retirement to dedicate his time to painting and travelling.

When asked once by gallery owner, Davison, what was the best painting he ever painted, he replied, with a twinkle in his eye, ‘the next one’

From then onwards, Cecil and Mona divided their time between their apartment in Roundstone and the house they had moved to in south Belfast. The west of Ireland would remain a great source of inspiration for his work. The couple also frequently travelled to see their grown-up daughters living in Hong Kong/Thailand, the United States/the Caribbean and Italy. An avid photographer, Maguire always travelled with his camera and painted the locations he visited. His daughters have their own private collections of his paintings, gifted to them by their father during his time spent in their chosen home places.

A great cook and a lover of good food, good wine and good company, Maguire had an affable manner and a good sense of humour. When asked once by gallery owner, Davison, what was the best painting he ever painted, he replied, with a twinkle in his eye, “the next one”. Maguire continued to paint into his 80s and lived alone following the death of his wife in 2016. He died surrounded by his family at his home in Belfast following a short illness.

Cecil Maguire is survived by his daughters, Denise, Amanda and Sian, his grandchildren, Serena and Michael and his sister, Irene. His wife, Mona, died in 2016. His brother, James, also pre-deceased him.