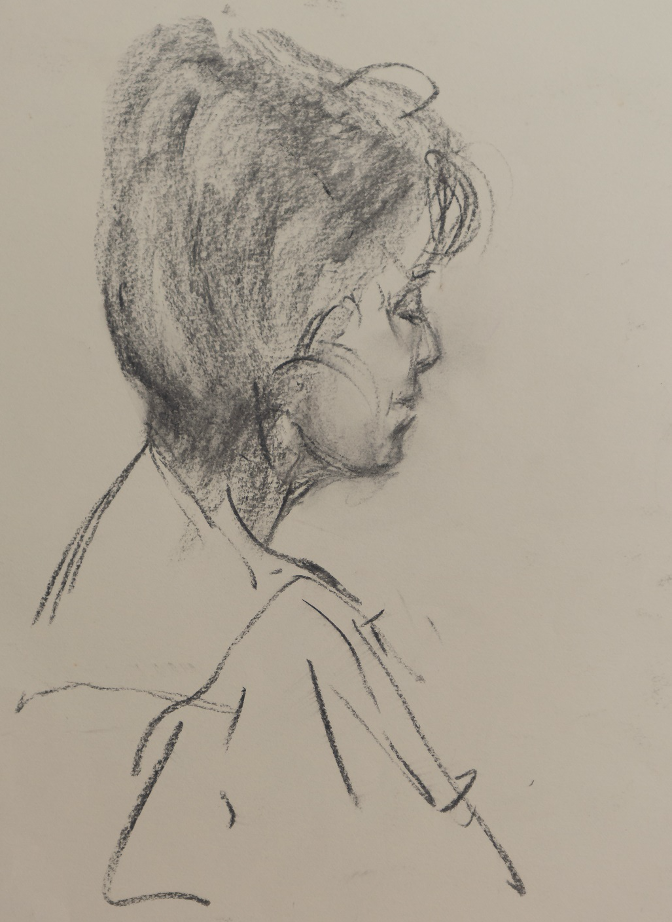 During her years as Honorary Secretary and Administrator between 1986 and 1992, Doreen raised the Academy’s profile significantly and inspired many of its activities. All this without fuss or any apparent effort, things just happened when she was around – a smile, a hint or an enquiry was all it seemed to take.

The design for the new colour catalogue was hers; it was launched in 1987 and featured as front cover a lithograph by Sophie Aghajanian. Exhibition posters followed two years later, the first a painting by Basil Blackshaw of the Academy’s winged horse Pegasus. Later posters included works by Neil Shawcross, James MacIntyre, John Breakey and Rita Duffy. Doreen also began a series of talks, demonstrations of painting and life drawing during the run of the exhibition and came up with musicians for opening nights and entertainers for the Annual Dinner.

With the help of Solly Lipsitz (Hon Academician) she revived the fortune of the Diploma Collection and brought it back to life. Restoration work was carried out, funded by the Association of Business sponsorship for the Arts. She also raised the very generous sponsorship of Awards and Prizes that the Academy now enjoys. She widened the Academy’s sphere of influence by organising exhibitions of Members work at Arts Centres in Coleraine and Newry – in these enterprises she relied on her husband Andrew’s active participation.

For as long as most of us could recall the Ulster Museum had played the role of perfect host to the Annual Exhibition but in 1988, we were required to find a new venue. The Ulster Museum needed all its gallery space for the Armada Exhibition, subsequent major exhibitions and rehabilitation work meant that the Academy required a new home for several years. The Department of Architecture QUB offered the use of its studio building in Chlorine Gardens for the month of August and for the next few years it played host to the Academy. Doreen met the increased burdens of organisation with equanimity. Energy (even if concealed by an easy-going and relaxed exterior), imagination, efficiency and charm can be useful at such times. As things turned out and largely thanks to her the building held a series of very successful Annual shows, so much so, that when the Museum invited us to return to the fold that invitation was politely declined for some years.

The Academy owes a lot to Doreen.